11 days after a new outright record was set, Foiling Kiteboarder Casey Brown takes another 3 minutes and 06 seconds off the Around Jamestown Record

New outright record is 47 minutes and 42 seconds for the 17.8nm course

October 30, 2021 – Newport, RI – A new outright record was set Saturday, October 30th for the  Around Jamestown Record. Casey Brown on his Foiling Kiteboard, Wyspa Tech, completed his attempt around Jamestown with an elapsed time of 47 minutes and 42 seconds and an average speed of 22.4 knots. This bests the previous record of 00:50:48, set just 11 days earlier by Rob Spets, also on a Foiling Kiteboard.

Casey chose to sail the course south from the start off Fort Adams at 08:59:29 EST. Brown departed in an 18-knot ESE breeze in a slack tide.

This was Casey’s first attempt to set the Around Jamestown Record, however he has been kiting for six years and foiling for the past three.

Brown said on the record, “It was fun, pretty perfect conditions other than 7-8 foot waves at Beavertail, but flat the rest of the way. Nice easterly, high teens with a couple of puffs up to 30. There were a lot of fish, I hit about five and crashed, along with three other crashes, but all in all pretty quick. I’ve been thinking about this record for a long time, so I’m just stoked, it’s pretty cool to break it.

I knew I was a close [to breaking the record], I had one crash close to the finish and I thought that might have put me over the edge. It was pretty tough on the legs especially reaching and then deciding how fast to push. If you go quick the entire time, you will crash a lot more and sap energy.

And I think you can probably still take time off the record, maybe get it down to 40 minutes in perfect conditions.”

Brown said on what he enjoys about kiting, “It’s pretty cool how quiet it is. Everything kind of unloads. I’ve grown up doing a lot of regular sailing everything loads up the faster you go, but the kite just kind of releases and it’s cool how silent it is. 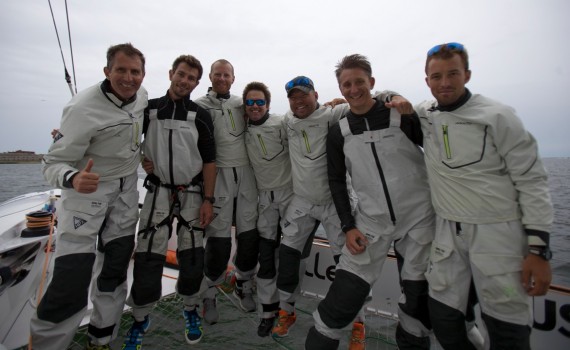 New outright record of 56 minutes and 33 seconds for the 17.8nm course takes down GC32 Argo’s record set in October 2014

June 27, 2015 – Newport, RI – A new outright record and time to beat was set Saturday, June 27 for the Mount Gay Rum Around Jamestown Record. Lloyd Thornburg of Santa Fe, New Mexico helmed Mod70, Phaedo3, around Jamestown with an elapsed time of 56 minutes and 36 seconds, besting the previous record of 00:58:31 by 1 minutes and 55 seconds. The record setting crew included Brian Thompson, Miles Seddon, Sam Goodchild, Warren Fitzgerald, Sam Bason, and Pete Cumming. They chose to sail the course around the island to starboard, sailing south from the start off Fort Adams at 17:29:48 ET, on an easterly breeze ranging from 10 to 15 knots on the start of an ebbing tide. Photos of Phaedo3 during today’s attempt can be found HERE.

Phaedo3, a Mod70 is a 70-foot trimaran, that is in Newport readying for the start of the NYYC Trans-Atlantic Race. The team chose to use the Around Jamestown Record as a training session for the Trans-Atlantic. This was the crew and boat’s first time sailing around Jamestown.

Owner/Skipper Lloyd Thornburg said, “We had been planning to attempt the record as practice before the Trans-Atlantic race start and we had been told it’s very hard to beat the record in the summer as the prevailing winds don’t give you the opportunity. So knowing that, it left us very much in doubt on whether or not we could break the record. But, with an easterly forecast, this really was really the only day to attempt. We decided to delay our start by an hour and a half so we could go down to Beavertail and practice gybing and check the wind on the backside.

We had a smashing start, flying the center hull going approximately 30 knots, but the wind was fluky and light on the backside and we never saw more than 15 knots of breeze. Once we got to the northern tip, the navigator said to us if we’re going to break the record we need to average 20 knots from here on in and we were going 14 at the time. I have to give credit to the guys because they really put their heads down and made it happen, but it wasn’t until we finished that we knew we broke the record.”

Sailors have until October 31st to attempt to break the new outright record and also secure one of the other divisional records. If by October 31st, no other team in any division bests Phaedo3’s outright record time, Phaedo3 will secure the outright record. When asked what he would do with all of the Mount Gay Rum if the record stands through the end of the year, Thornburg replied, “if the record holds, I think we’ll take the rum, share it and have a party.”

“It was fun, pretty perfect conditions other than 7-8 foot waves at Beavertail, but flat the rest of the way. Nice easterly, high teens with a couple of puffs up to 30. There were a lot of fish, I hit about five and crashed, along with three other crashes, but all in all pretty quick. I’ve been thinking about this record for a long time, so I'm just stoked, it’s pretty cool to break it." -Casey Brown ... See MoreSee Less

A strong easterly this morning means another record attempt. Casey Brown is heading out on his foiling kiteboard to attempt the record. Stay tuned for updates! ... See MoreSee Less
View on Facebook
· Share

We have a new outright record holder! Coming it at 50 minutes 48 seconds Rob Spets has set the Around Jamestown Record. Congratulations! ... See MoreSee Less
View on Facebook
· Share